See the latest SIM-only and bill pay phone deals. Choose from low cost through to unlimited SIM deals and pick from popular handsets like the iPhone 12 and Samsung Galaxy S21.

Get a great offer on a new bill pay phone, no matter which mobile you choose.

Looking for a new phone?

If you need a new phone, the right monthly bill pay deal could save you hundreds of euro. Here are some of the best bill pay phone deals.

The Apple iPhone continues to revolutionise and lead the way when it comes to mobile phones. Here’s how to pick the right iPhone for your needs and how to get the best deal.

The Samsung Galaxy range is one of the most popular ranges of handsets on sale worldwide. Here’s how the current Samsung Galaxy offers compare in Ireland.

Looking for a SIM-only mobile phone plan? Switcher.ie can help you find the best deal.

Switching to a SIM-only deal

With a SIM-only deal your bills will be lower as you only pay for your calls, texts and data - not your handset. Here are some SIM-only plans to suit every type of phone user.

How to unlock your mobile phone

Unlocking your phone takes minutes and lets you pick the best SIM only deal on the market. Here’s how to unlock your handset.

Is mobile phone insurance worth it?

Mobile phone insurance can offer valuable financial protection if you lose or damage your phone, but it can also be expensive. Here’s how to work out whether you really need it and how to pick the best cover.

What are roaming charges?

Irish mobile phone users travelling within the EU can ‘Roam like at Home’, but the costs of using your phone abroad can still be confusing, so here’s all you need to know about roaming in the EU and UK.

Who offers the best mobile phone coverage in Ireland?

Good phone reception is crucial for making and receiving calls and texts, as well as accessing data. Here’s how to work out which network can offer you the best coverage. 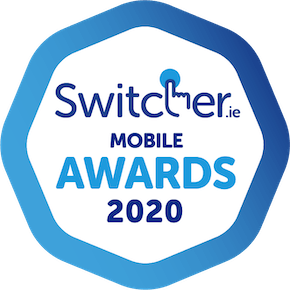 The Switcher.ie Awards - now in its seventh year - is an annual event, designed to reward excellence in the telecoms industry.

The mobiles awards are judged using a mix of in-depth consumer surveys, customer ratings and an expert judging panel.

The aim of the awards is to help consumers make better-informed buying decisions, by giving them independent feedback on things like the value, speed and customer service available from providers.

What providers do you compare?

We compare mobile deals from all the top providers in Ireland, and you can find the right plan at the click of a button.

What deals do you compare?

We compare SIM-only deals and bill pay phones, so whether you’re looking to keep your current phone or get a brand new one, we’ve got it covered.

How do I compare SIM-only mobile deals?

Work out what’s important to you and then find a deal that matches your needs by comparing features like:

You can click the ‘Show More’ button to see additional features for each deal.

Should I choose a SIM-only deal?

If you’ve reached the end of your current mobile phone contract, but are still happy with your handset, a SIM-only deal could be a good option.

SIM-only plans are cheaper than plans that include a phone, as you don’t need to pay off your handset on top of your monthly costs.

The majority of plans are 30-day contracts, so you’re not tied down to a lengthy contract and have the freedom to switch to another deal after a short time.

How do I compare bill pay phones?

Select a phone to explore and we’ll show you the main features of the phone and call plans available.

Do the same for each phone you’re interested in until you find the right one for you.

Once you’ve chosen the right bill pay phone and call plan, you can get it by clicking on ‘Go to site’ and we’ll direct you to the deal on the provider’s website.

Should I choose a bill pay phone?

The biggest advantage of a bill pay phone is that you get a brand new phone when you sign up to a bill pay phone contract. This means you can generally upgrade your phone every two years, or sooner if your contract is shorter.

It’s not the cheapest option but there are some great bill pay phone deals to be found if you shop around.

Bill pay phone contracts aren’t as flexible as SIM-only ones as you’re usually tied in for 12, 18 or 24 months.

It really depends what you’re looking for. For example, the cheapest SIM-only deal on the market may not give you the amount of calls or data you need, and the network coverage may be poor. At the same time, there’s no point paying extra for data you won’t use.

Only pay for the features you need, at the cheapest price.

Again, it depends on your individual needs. Once you know the phone and call plan features you want, you can compare all the plans that include those features, to find the best deal.

Check the total cost of each plan by adding any upfront cost to the monthly payments for the duration of the contract.