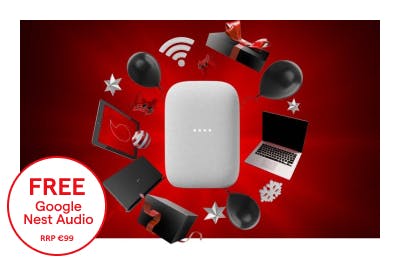 What is broadband only?

Broadband only is a broadband without a phone or TV. Most broadband providers in Ireland do require a phone line to install your broadband service, which means finding a true broadband-only deal with no phone line difficult.

Can I get broadband without a phone line?

You can, but the choice is limited. Virgin Media is the only major Irish provider that offers a “true” broadband-only plan without a phone line as they supply the broadband via their cable network.

The majority of broadband only deals offered by Irish providers do need an active phone line to deliver a broadband connection. Broadband providers charge for this line rental which is included in the monthly advertised price - even if you don’t use a home phone.

What is the cheapest broadband only deal?

The cheapest broadband only plan is from Vodafone with their Vodafone Simply Broadband plan which costs only €30 for the first 12 months, and €50 thereafter.

What is the fastest broadband only deal?

The 1Gb Broadband plan from Virgin Media is one of the fastest plan with speeds of up to 900Mb.

Does fibre optic broadband use a phone line?

Yes. Most fibre connections in Ireland are Fibre-to-the-Cabinet (FTTC) which means the majority of your broadband connection would be fibre optic. The fibre connection is delivered to your nearest cabinet or exchange, and then the part between your home and the cabinet is brought by the older copper cables.

That’s why line rental is almost always included in a broadband package. The line rental cost is included in the overall monthly price, which means it’s usually not possible to separate out the phone line cost even if you don’t use it.

I do not want a phone line, just broadband only

There are three main alternatives:

If you’re happy to get your broadband via phoneline, but simply don’t want a phone package added onto your broadband deal, there are plenty of providers to choose from, such as eir, Pure Telecom, and Vodafone.

Line rental is the monthly fee you to pay in to have a phone line. This cost is bundled in with the price of your monthly broadband. The cost line rental is no longer separate from the cost of broadband.

Phone line package or phone package mostly refers to the call bundles you can add to your broadband plan. If you use your home phone to use for calls then a phone package can save you money.

Is broadband only cheaper?

Many broadband providers such as eir, Sky and Vodafone include a call package with the cost of your broadband, so it might be cheaper to keep your broadband and phone combined. Broadband only deals may not always be cheaper.

Switching is quick and easy and could save you a bundle, so why not see if there’s a new deal that could suit you?

A fast, reliable broadband connection is vital for a quality, hassle-free broadband service, so we’ve got all of the information you need on broadband speeds available in Ireland.

The broadband connection types available in your area will influence the speeds you can get.

A guide to NOW TV - the 'no strings' streaming service

Interested in dipping your toe into paid TV content, but don’t want to sign up to a lengthy contract? NOW TV could be exactly what you’re looking for…